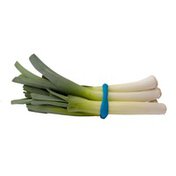 The Instacart guide to Chinese leeks

The Chinese leek, or Allium Tuberosum, is native to the Chinese province of Shanxi but is now cultivated around the world. It goes by several other names, including Asian chives, Chinese chives, garlic chives, and Oriental garlic.

This clump-forming perennial plant grows from a small, elongated bulb. The bulb itself has a tough and fibrous texture. Unlike garlic, the Chinese leek has a triangular base that grows into strap-shaped leaves less than 1/2-inch wide. In warmer climates, the Chinese leek's stalk remains green year-round. In colder regions, the stalk completely dies back to ground level and re-sprouts from roots in the spring.

The flavor of Chinese leeks more resembles that of garlic than chive. Its wide cultivation over the centuries has seen the Chinese leek used for many purposes, including as an ornamental plant in gardens and for traditional medicines. Today, the Chinese leek enjoys a favored status in the culinary world. The leaves, stalks, and even unopened flower buds get used for flavoring in many dishes.

Chinese Leeks Near Me

Buy your favorite chinese leeks online with Instacart. Order chinese leeks from local and national retailers near you and enjoy on-demand, contactless delivery or pickup within 2 hours.

Freezing Chinese leeks properly takes a little effort. First, trim off the roots. You can then slice the bulbs into smaller pieces if you prefer. In order to keep them from losing their color, you should blanch them for 30 to 60 seconds in boiling water and then place them in an ice bath to stop the cooking process.

Lay the leeks out on a tray to dry and then place in the freezer for one to two hours. Then, remove the tray and put the frozen leeks in a vacuum-sealed bag, and return them to the freezer. Freezing them on the tray first will keep them from sticking together in the plastic bag and allow you to take out a few at a time. Chinese leeks frozen this way will last one to two months in your freezer.
Yes. Chinese leeks are a good source of vitamin C, which helps the body grow and repair tissue. Vitamin C provides a boost to the immune system and helps strengthen bones and teeth. Chinese leeks have a good amount of vitamin A, which promotes good vision and healthy heart, lung, and kidney function. Chinese leeks have no fat, no sodium, and only 30 calories for every five stalks.