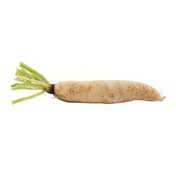 The lo bok radish is a long radish with firm white flesh. The skin has a creamy color and is tinged with green near the top, where the radish leaves are attached. The flavor of the lo book radish is mild and sweet, and it is delicious eaten raw in salads or pickled to accompany many Asian-style dishes.

Lo bok radishes are often called Korean radish, Mu, or Moo. They are related to daikon radishes but have a more round, plump shape as opposed to the long cylindrical shape that daikon radishes have. As with all radishes, the lo bok is a member of the Brassicaceae family, which includes mustard, cabbage, broccoli, and kale. Lo bok radishes grow best in cool climates. If they grow when the weather gets too hot, the flesh becomes pithy, and the taste becomes bitter.

Lo bok, can be used in any recipe that calls for daikon radish as the taste and texture of these two radishes are very similar. One of the most popular ways to eat lo bok radish is to make it into kimchi, a dish made up of pickled cabbage, radish, onions, and hot chilies. Lo bok radish goes well sliced or grated into salads, served on sandwiches with sliced ham, or cut into chunks and added to a vegetable platter.

Lo Bok Radish Near Me

Buy your favorite lo bok radish online with Instacart. Order lo bok radish from local and national retailers near you and enjoy on-demand, contactless delivery or pickup within 2 hours.

Put the cabbage in a bowl and pour the salt over it. Massage the salt into the cabbage and let the mixture sit for about 20 minutes. Combine the shrimp paste or fish sauce, ginger, red pepper flakes, and sugar. Rinse the salt out of the cabbage, place it, the radish, and the sauce into a 2-quart jar. Let it ferment for about seven days.