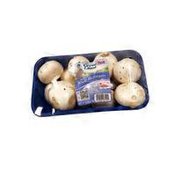 Originally called Calvatia Gigantea, giant puffball mushrooms are a special type of mushroom, notable due to their unusual shape and size. Unlike most mushrooms, they lack the usual cap and stem, as they usually just have the appearance of a large white globe. They vary in size, with most having a circumference between four and 30 inches, but it's not uncommon for some to develop even further. A larger-than-average specimen of a giant puffball mushroom can grow to almost two feet in length.

A giant puffball mushroom can hold over 7 trillion spores. It releases them either by being cracked open or through a small opening at the top, allowing the wind to spread them. It is an edible mushroom with a nutty and earthy taste that quickly absorbs other flavors, suitable to being used in a wide range of dishes. Aside from being good to eat, they also have potential medical uses, with its dry spores reportedly being used by Native Americans as a natural coagulant that stops the bleeding in case of an open wound and prevents infection.

Preparing a giant puffball mushroom for cooking is typically easier than a regular mushroom because of its round shape and thick skin, keeping most dirt and debris on the outer side. Therefore, all you have to do is peel off the skin, and you will be left with a clean interior. Although some people also eat the skin, it is usually much tougher to chew than the inside of the mushroom. However, it is usually best to keep the skin on until you're ready to cook the mushroom, as this can keep the interior part from drying out.

Giant Puffball Mushrooms Near Me

Although giant puffball mushrooms are best eaten right after they are harvested, their large size usually means that you may find it difficult to use it all before it goes bad. One of the best ways to preserve it is by cutting thin slices, dehydrating them, and re-hydrating them whenever you want to use them. If you have room in your refrigerator, the most effective way to store a giant puffball mushroom is to chill it whole, as soon as possible after it's picked.
Giant puffball mushrooms don't necessarily have exact spots in which they grow and instead tend to appear wherever the wind carried their spores. In North America, they usually appear in meadows and around forest openings, around autumn. However, the wind can carry them over long distances, and it's not uncommon that they appear in urban areas, in well-fertilized pieces of land such as lawns.
It takes a few weeks for the giant puffball mushroom's fruity body to develop. Once it has, it soon starts to decompose, making it unsafe to eat. The main reason it quickly decomposes is its high protein content, making it more prone to rotting and emitting bad odors.