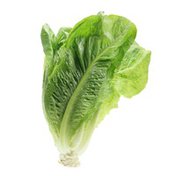 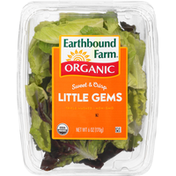 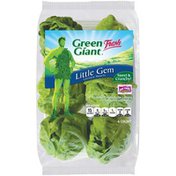 Lettuce may be one of the more underrated vegetables in terms of the nutrients it brings to our diets. Our perceptions may be partially shaped by the most common lettuce for salads, which is iceberg. You might be surprised to know that lettuce is available in an enormous number of varieties. Experiment a bit with the different lettuces coming off the world's farms, and you might find one that you just love.

Perhaps the best thing to talk about with little gem lettuce is its nooks and crannies. Slice a head of little gem lettuce in half, and you will find lots of pockets that can collect dressing and give your salad or other meal an extra boost of taste. The little gem lettuce resembles a small head of romaine. It originated in France and remains popular across Europe, but it is increasingly available in the United States.

Little gem lettuce has a sweet taste to it and has many uses in various types of salads or just as an edible garnish on your evening's entrée. Use it as you would a head of romaine lettuce or butter lettuce. It can be part of a Caesar salad, mixed with herbs, or used to create an Asian salad topped with dressing or walnuts and feta.

The Internet offers enormous numbers of delicious little gem lettuce recipes, including little gem salad mixed with a lemon vinaigrette or walnut vinaigrette. You will also find recipes that call for grilling little gem lettuce. Because it's such a sturdy lettuce, you can slice it in half and toss it on the grill, mixing it with feta cheese, olive oil, or other toppings for taste and flavor. It's also a good addition to smoothies and soups, though make sure to add it to those as individual leaves.

Little Gem Lettuce Near Me

Lettuce offers fun and different varieties. A delicious and well-made salad always hits the spot, or you can always use leaves of lettuce on sandwiches or other parts of your cooking experience. Put little gem lettuce on your shopping list and order it next time you are on the Instacart app, along with your other grocery items for the week.

Instacart shoppers will head to the store for you, picking out the best-looking heads of little gem lettuce as well as all the items on your list. We will do our best to provide same-day delivery, and in many instances, we can get your groceries to you in as little as 2 hours! Order from Instacart today.