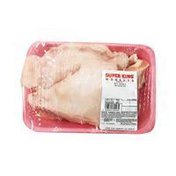 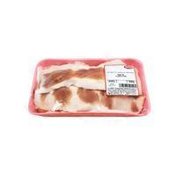 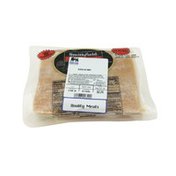 Smithfield Sliced Fat Back
per lb 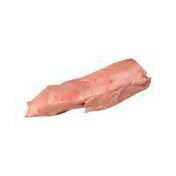 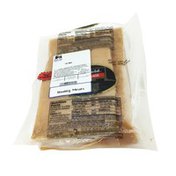 Smithfield Fat Back
per lb 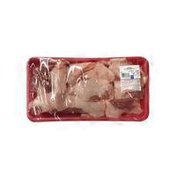 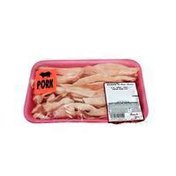 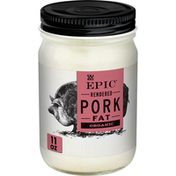 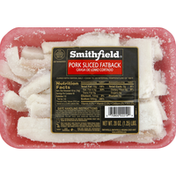 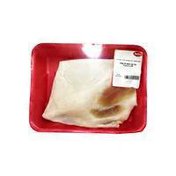 Pork fat is versatile animal fat that has different flavor profiles depending on what part of the pig it came from. The fat can be rendered into oil for frying foods or used as an ingredient, a topping, for basting, and even in mashed potatoes. This venerable foodstuff once fell out of favor for various reasons, but pork fat is making a comeback as people explore cuisines from other cultures, engage in diets that are heavy on the use of animal fats as part of the daily meals, and seek out novel ingredients to create interesting flavors and make their foods more interesting.

There are three different types of fat on a pig, and all have different uses due to their texture and flavor. The best pork fat is known as leaf lard and is found around the kidneys and loins. Fatback comes from the pig's back, and belly fat is found between the layers of meat on the belly. Rendering leaf lard results in snow-white lard that is used in pie crusts for a flaky texture. Fatback is most commonly used for fried and sauteed dishes and imparts a delicious pork taste. Belly fat is also used for frying and sauteing foods.

Pork fat is used in many Asian dishes as an oil and ingredient. When you're looking for an authentic taste that puts you in mind of a street vendor in an Asian night market, you want pork fat. Pork fat is used primarily as cooking oil, but crispy pork fat is sometimes used as a garnish to give a dish more texture and flavor. Fatback is the best fat for making crispy pork fat as it holds up to the frying process.

Pork Fat Near Me

Buy your favorite pork fat online with Instacart. Order pork fat from local and national retailers near you and enjoy on-demand, contactless delivery or pickup within 2 hours.

Yes, pork fat is keto-friendly. The use of pork fat as a cooking oil and ingredient is encouraged because of its flavor profile. Pork fat can be used to baste other meats or drizzle over vegetables to make them tastier. It's also excellent for use in a warm vinaigrette. If you bought pork fat with the skin on, you can cut up the skin and make it into pork cracklings, a keto-friendly snack.
The flavor imparted by the pork fat depends on where the fat originated from. If you're using belly fat, then yes, your food will pick up a flavor that has a strong bacon taste. Bacon comes from the belly portion of the pig, as does pork belly. Pork fat trimmed from the belly will have a flavor profile that resembles both of these cuts. Leaf lard has little to no flavor, and rendering removes what little flavor there is. The lack of flavor is what makes it perfect for use in certain types of pastries.
Yes, you can use pork fat in your sausage mix. Adding pork fat into the mix adds oil to lean meats such as venison and makes it tastier. You can also use it to add another flavor to your final product. Pork fat adds a creamy texture and won't overpower the flavor of the spices and meats used in the sausage recipe.