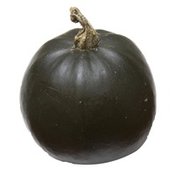 Gem squash is a round, dark green summer squash that originates from Central America. You can easily cultivate gem squashes in a sunny location. Their seeds, which were once difficult to obtain, are now available through mail-order companies. People usually use dried gem squashes as decorative gourds in the fall.

Gem squash is related to the pumpkin and the butternut squash. It's edible at all stages of its development. Early gem squash is about the size of a golf ball, and its seeds and skin are edible, as is its flesh. You can bake a whole gem squash in the oven or microwave, but you should pierce it before cooking.

You can also cut gems in half and cook them in several ways, including grilling, broiling, and baking. You can also scoop out the gems' seeds before cooking, and you can fill the halves with meats, cheeses, creamed corns, and spices. Gems have a sweet flavor, so sugar, nutmeg, and cinnamon also are popular flavorings for these vegetables.

Gem Squash Near Me

Buy your favorite gem squash online with Instacart. Order gem squash from local and national retailers near you and enjoy on-demand, contactless delivery or pickup within 2 hours.

You can roast gem squash, but it might take a little extra time than other cooking methods. The delicious caramelization added to the squash by roasting is worthwhile. If you're looking for a hand-off cooking technique, roasting is one of the best ways to cook gem squash. You can add any seasoning you want before roasting, but make sure not to put too much olive oil, or your gem squash can get soggy.

Preheat your oven to about 425 degrees Fahrenheit and then cut the squash into bite-size cubes or chunks. Place them in a large shallow sheet pan or roasting pan, and then sprinkle with pepper and salt and drizzle with olive oil. If desired, you can add another spice blend. Roast the squash uncovered for about 15 minutes or until the squash is tender.
Generally, ripening or aging gem squash doesn't pose any food safety problems. They are still edible. However, you have to make sure that they're only overripe and not rotten. You can tell if a gem squash is overripe if it has much softer areas than the rest and somewhat slimy.

It's a different matter if you want to consume overripe squash. Both the texture and task will change, becoming spongy, soft, or mealy, and the taste can get bland. You may cook it the same way as a young gem squash. If it doesn't work, you may also try some recipe that masks the texture and taste change, such as something involving a coulis or a puree, and adds spices.
If you have too much fresh gem squash to use and want to save a few for later, you can freeze them. Before you freeze the squash, it's important to blanch them for three to four minutes. Blanching protects the color, flavor, and even the nutrients of the squash. Make sure to drain the squash after blanching to remove any excess water. To make sure they have dried completely, you can sandwich the squash between two paper towels for approximately 10 minutes.

You can freeze the blanched gem squash in a plastic bag for up to six months. You can fill freezer-safe plastic bags or plastic containers with the squash. If using plastic bags, consider pushing as much air as possible out of the bag prior to before you seal and place them in the freezer. Keep them in the freezer until you're ready to use them.