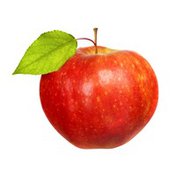 The history of the Wolf River apple dates to about 1856 when a lumberman from Quebec moved with his family to Wisconsin. He purchased a bushel of Alexander apples (thought to be a Russian variety of apples) along the way. When he arrived at his new home, he planted the seeds from these apples on his property along the Wolf River in Wisconsin. From this planting came a wonderful large baking apple with a white flesh which is soft and sweet but can be mildly tart if picked early.

Wolf River apples are not only large but tend to have an irregular shape. The top is often angled and slightly lumpy and tends to have prominent lenticels. But don't worry, lenticels are an important part of an apple. They are the pores of the apple and how it breathes.

Wolf River apples are one of the largest apples grown. The size can range from four inches to eight inches and weigh between a half pound and one pound. It is important these apples be allowed to mature before harvesting. They become sweeter and bigger as the weather becomes cooler. In fact, most are harvested after the first frost. This apple tree is a hearty tree, surviving just fine in colder regions.

It is best used as a baking apple. The apples are so large that only two or three are needed for a pie, and they retain their shape so well even when baked. They make great apple pies, applesauce, apple turnover, and apple juice. These recipes do not need as much sugar because the Wolf River is a sweet apple. If you have a fruit dryer, Wolf River apples make great dried apples and hardly shrink during the drying process. Wolf River apples may be most known for the creamy, sweet, smooth apple butter that is created after many hours of cooking slowly over the stove.

Because the Wolf River apple is so large and retains its shape when baked, it would make a delicious baked apple! From the top of the apple, core and scrape out the middle but leave the bottom intact. Make a filling of butter, brown sugar, cinnamon, pecans, dates, and/or raisins. Place the apples in a baking pan and fill the middle of the apple. Pour boiling water into the pan and bake.

Once the apples have become soft and bruised or have been stored for a while, a good option is to make applesauce and apple cider with them.

Wolf River Apple Near Me

Buy your favorite wolf river apple online with Instacart. Order wolf river apple from local and national retailers near you and enjoy on-demand, contactless delivery or pickup within 2 hours.

Since apples release a gas that enhances the ripening of other produce, keep apples separate from other produce. Alternatively, if you have produce that needs to ripen faster, place them with the apples and let the apples do their magic.
No, unfortunately, apples do not freeze well.