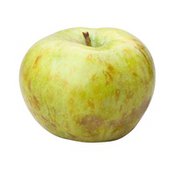 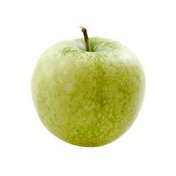 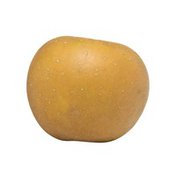 Today, Russet apples are out of favor, mainly because they have a dull color and mottled face that doesn't look as good as the bright and shiny apple varieties now available. However, the flavor has consistently been above average. Roxbury Russet apples are grown predominantly by heirloom specialists yet still find their way into grocery stores and farmers markets across the U.S. Northeast.

As the oldest apple cultivar in the United States, the Roxbury Russet was likely a seedling brought over by European settlers. Perhaps one fascinating aspect of North American apple development was how few of the original European varieties could adapt and thrive in the environment. Instead, seedlings of European varieties were better suited to the climate and further propagated. The fact that apples do not grow true from seed made this propagation possible.

Roxbury Russet Apple Near Me

Yes. Although thicker and coarser than other apple varieties, you can still eat the skin. You should wash your Roxbury Russet apple first before eating. An apple eaten with the skin has 50% more phytonutrients than the flesh alone. Apple skins are good sources of antioxidants, vitamins, and nutrients linked to many health benefits, including reducing the risk of certain types of cancers in the body.
Yes. Like any fruit grown outdoors, apples get exposed to the elements where dirt and debris can collect. Also, apples produce a natural wax-like coating to prevent moisture loss and protect the apple from insects. This natural coating has a milky-white color, giving the apple a dull appearance, but it's harmless if ingested. A simple rub with a clean cloth will remove this coating and restore a natural shine to your apple.

Some farmers add a synthetic coat of wax designed to protect the apples from damage during shipping and storage. These secondary coats usually consist of natural components derived from plants. Some waxes are synthetic polymers or petroleum-based and developed in labs. A gentle scrub in cool water should remove the wax.