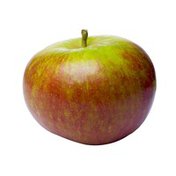 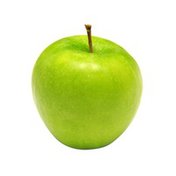 A medium-sized piece of fruit, the Allington Pippin apple is known for its candy-like and aromatic pineapple flavor. This flavor tends to alter a bit in storage, as the pineapple flavor doesn't seem as intense, although it remains rather sharp. A brownish-red flush and striping enhance its cream-colored flesh and pale yellow skin.

Developed by horticulturist Thomas Laxton in England in 1884, the apple was originally known as the Brown's South Lincoln Beauty. He created it by crossing Cox's Orange Pippin with the King of the Pippins, and this new variety earned recognition at the Royal Horticultural Society in 1889. A few years later, another Englishman named George Bunyard began growing the same variety, and after buying the naming rights, he renamed it after his Allington Nursery in Kent.

The Pippin part of the name refers to an apple that was grown from a seed that randomly sprouted. Most apples that are grown for home gardening or commercial use end up as Pippin varieties. The Allington Pippin apple became popular in the 1930s and is mostly found in home gardens and nurseries today.

Allington Pippin Apple Near Me

Apples prefer refrigeration. Like most apples, Allington Pippin apples have a lengthy shelf life. They are safe to eat for up to three months, depending on when they're harvested. The ones picked early in the season are best eaten fresh, while the ones picked mid-season are better to store. To keep these fresh, put five to 10 of them in a polythene bag, make a few air holes, and store them in the refrigerator. They will not last nearly as long at room temperature. Late-season apples are the best type as they last the longest.

Apples keep best at a temperature between 31 to 36 degrees Fahrenheit, so try to keep the apples in the coldest part of the refrigerator. Also, since they emit a colorless and harmless gas called ethylene, apples should be kept away from certain produce as the gas causes them to ripen quicker.
This exceptionally healthy fruit is packed with numerous research-backed health benefits. One medium-sized Allington Pippin apple equals 1.5 cups of fruit, and two cups of fruit are recommended with a 2,000-calorie diet. Some of these health benefits include the following: