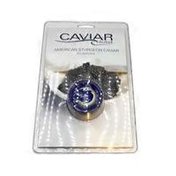 The Instacart guide to sturgeon

Large and imposing, sturgeons are a freshwater fish. They can be found in the temperate rivers of southern Russia and Ukraine, as well as in the lakes and rivers of North America. Sturgeons are a truly impressive fish to behold. Bony plates, called scutes, protect their heads and long bodies, and the sturgeon's distinctive tail fin is unique in that its lower lobe is shorter than its upper lobe.

Growing between seven to ten feet, these are enormous fish, but sturgeon can grow even larger on rare occasions. In fact, in 1827, the biggest female sturgeon ever recorded was caught in Russia's Volga Estuary. This monster fish was 24 feet long and weighed in over a whopping 3,000 lbs. This amazing catch is still the world record to this day.

While sturgeon may look fearsome, these large fish don't have any teeth. Sturgeons actually hunt for their prey on lake and river beds. They use sensitive barbels that hang from their mouths like whiskers to find their food. When they find their prey, which typically consists of shrimp, plants, aquatic insects, clams, and sludge worms, they stuck up their food like a vacuum.

Fishing for sturgeon is a popular pastime in North American, and these fish are mostly sought after for their flesh and their eggs, also known as roe. Sturgeon flesh is popular as it can be smoked, cooked fresh, or even pickled, but sturgeon roe is considered to produce the world's most delectable caviar.

Buy your favorite sturgeon online with Instacart. Order sturgeon from local and national retailers near you and enjoy on-demand, contactless delivery or pickup within 2 hours.

When you serve sturgeon at your next dinner party, try whipping up some of these side dishes to go with it.

Wild rice with steamed cauliflower is a simple, yet superb side that your guests will love, as it pairs nicely with your sturgeon not matter how you decide to season it. Roasted or fried potatoes seasoned with rosemary also serve as an excellent companion to sturgeon.

Of course, you can never go wrong with quinoa. This superfood is not only a tasty side dish but also packs a nutritious punch as it's filled with iron, vitamin B, fiber, phosphorus, and more. The nutty flavor and refreshing, crunchy texture is a brilliant companion to hearty seafood-like sturgeon. Your friends won't be able to wait till the next dinner party! With same-day delivery via Instacart, planning your follow-up dinners will be easier than ever!
If you are serving caviar, have your Instacart shopper pick up a bottle of Sauvignon Blanc for you. There's nothing better than a glass of crisp white wine to complement the taste of caviar. A classic choice, this will leave you refreshed and excited for your next bite of caviar. Another perfect companion to the flavor-dense pearls of sturgeon caviar is a vibrant and light-bodied Pinot Grigio. This Italian wine enhances, rather than smothers, the flavors of this delicacy.

Of course, if you are looking to expand your wine horizons, try pouring yourself a glass of Blanc de Noir. This sparkling white that's produced from black, and deep red grapes is known to be one of the best wines to enjoy with caviar. When you follow a spoonful of caviar with a sip of Blanc de Noir, you'll forget that you're not at a Michelin star establishment. When you order through Instacart, everything you need to have a 5-star experience at home will be delivered right to your door!