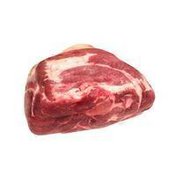 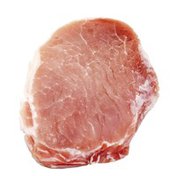 The Instacart guide to picnic steaks

Picnic steaks come from the Boston butt cut of the hog. Contrary to what the name may imply, the butt portion of pork runs from the hog's front shoulder down to the foreleg, not the animal's hindquarter. The pork shoulder primal cut is divided into the secondary cuts of the Boston butt and picnic shoulder. The name derives from when purveyors would make their primal and secondary cuts and put them in wooded barrels for storage. These barrels were called butts, and the pork stored in them was simply pork butt, and the name stuck over the years, even after moving away from barrel storage.

The picnic steak itself comes from the picnic shoulder, directly below the Boston butt. Because of the tapering of the leg, finding a consistent picnic steak size can be difficult. The picnic steak almost always comes with the skin removed and the bone in, which will add a nice flavor. A picnic roast will have the skin on, which helps insulate the meat for roasting but has no value to grilling when portioned into the picnic steak cut.

More grocers are cutting the picnic shoulder into picnic steaks than ever before because of its sweet, juicy flavor and low cost. You can request boneless picnic steaks at some grocery stores, as many now sell boneless picnic roasts that are easily portioned into steaks. A 0.75-inch cut works well for grilling. If you plan on cutting a picnic roast into steaks yourself, be sure to ask for a boneless roast since most kitchens don't have a blade that can handle the bone. A good tip would be to put the whole roast in the freezer for 15 minutes to firm it up to maintain its shape during cutting.

The pork collar also comes from the pork shoulder primal, just above the Boston butt. Also called the Coppa, this cut's claim to fame has been its widespread use in the cured Coppa salami.

Several high-end purveyors sell cuts from the Kurobuta pig, the porcine equivalent of the Wagyu cow. The Kurobuta cuts will cost more than your average pork cut, but it's still a bargain compared to Wagyu.

Picnic Steaks Near Me

Buy your favorite picnic steaks online with Instacart. Order picnic steaks from local and national retailers near you and enjoy on-demand, contactless delivery or pickup within 2 hours.

As with most marinades, the longer you let them sit and soak up the mixture, the more flavor is infused into the meat. You should aim for two to three hours at a minimum and overnight if possible. Some Cuban recipes recommend marinating for several days before cooking.
A lot of this comes down to personal preference. Most picnic steaks are cut into 0.5-inch and 0.75-inch thicknesses, which makes them great for grilling or pan-frying. Anything thicker may not give you the final tender texture you want from your meat. You want to look for cuts that are red to pink. Any dull or gray coloring may indicate age and should be avoided.
The picnic steak will stay fresh in your refrigerator for several days without a problem, but this question always depends on how fresh the picnic steak was when you purchased it. If you shop with a reputable grocer, you'll see the package date clearly marked. You can expect them to stay fresh in a sealed container or bag for up to five days in the fridge.

For more extended storage, you can use a vacuum-sealed bag and place them in your freezer. In this manner, the picnic steak will keep for several months.