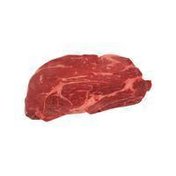 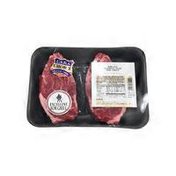 The Instacart guide to coulotte steak

Coulotte Steak is a lean cut of meat from the hindquarter region of the cow between the loin and the round. The coulotte steak, alternately referred to as the top sirloin cap steak, derives from the French word for 'cap,' coulotte. The triangular-shaped coulotte is a muscle that covers the main body of the top sirloin. A coulotte steak is typically a couple of inches thick and has a thin layer of fat covering one side of the meat. This small amount of fat imparts some delicious flavor to the coulotte steak, as this lean cut is relatively free from marbling that characterizes other varieties of steak.

Coulotte steak is notable for its rich coloring and soft texture. It is incredibly versatile and can stand up to marinating, grilling, and other preparations. Coulotte steak is known in Portuguese as Picanha and plays a starring role in Brazil's churrasco tradition of grilled meats.

Coulotte Steak Near Me

Buy your favorite coulotte steak online with Instacart. Order coulotte steak from local and national retailers near you and enjoy on-demand, contactless delivery or pickup within 2 hours.

As part of a balanced diet, coulotte steak can be an important source of protein and other nutrients. This lean cut is lower in fat than other types of steak and has 27 grams of protein for a 100-gram serving, about half of the recommended daily protein intake. Red meat is somewhat high in cholesterol and should be consumed in moderation but is a great source of iron, B vitamins, and other nutrients.
In addition to the coulotte steak, a coulotte roast also comes from the top sirloin area of the cow. Larger in size than the coulotte steak, the roast is wonderful as a comforting meal alongside green vegetables and roast potatoes. The roast is typically brushed with your desired sauce (mustard glaze is particularly delicious) and put into the oven to roast for about an hour at 350 degrees Fahrenheit until an internal thermometer indicates the level of doneness that you desire. As with cooking on the grill or stovetop, allow the coulotte roast to rest before serving.
Whether you are cooking the coulotte steak on the grill or the stovetop, use an internal meat thermometer to ascertain when the meat has reached your desired temperature. If you enjoy your meat on the rare side, look for the thermometer to reach a temperature of 130 degrees Fahrenheit. Medium-rare steak should read 135 degrees Fahrenheit and 140 degrees for a steak cooked medium. A well-done steak is ready to remove from the heat when the thermometer registers a temperature of 155 degrees Fahrenheit. If you take the steak off the heat source and realize that it is more rare than you would like, simply place it back on the grill or stovetop for an extra few minutes to get it up to your preferred level of doneness.

Whether you are shopping for a midweek dinner or hosting a large neighborhood barbecue, let Instacart make your planning and preparation a breeze. With a wide selection of steaks and seasonings that are sure to please everyone at your table, Instacart offers same-day grocery delivery and can have your groceries at your door in as little as 2 hours!