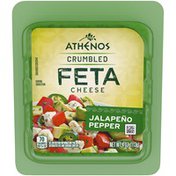 Beyaz Peynir translates simply to white cheese in Turkish. This cheese is made from unpasteurized goat, cow, or sheep's milk. Vegetable rennet is added to the milk to help it clot. Once the milk has curdled, it's chopped, pressed, and strained. The resulting blocks are salted and soaked in a brine solution for no less than three months. Most Beyaz Peynir cheeses are soaked for around six months.

The resulting cheese is crumbly with a distinct tangy texture. Beyaz Peynir is sold in a jar or other container that still contains the brine, as this preserves the freshness of the cheese.

Turkish cheeses like Beyaz Peynir are made differently in each region, using the animal milk and conditions most readily available in the area. Seemingly minor factors like the diet of the animal that was milked will impact the flavor of the finished cheese. Seasonality and weather play a role as well. Beyaz Peynir can also come from either whole or half milk, which impacts the richness of the resulting cheese. This means that one Beyaz Peynir can taste different from another.

Some of the best Beyaz Peynir cheeses in Turkey come from the Sea of Marmara and Thrace. However, the distinctive flavors of Beyaz Peynir lend to a wide variety of preferences.

When purchasing Beyaz Peynir, you should look at the packaging to learn more about the exact flavor that you can expect from the cheese. It will often specify what type of milk the cheese was made from. Goat's milk gives the cheese a sweeter flavor. Sheep's milk has a flavor that's more buttery and nutty. The fat and protein content of sheep's milk is higher, but the fat molecules are particularly small, so cheeses made from sheep's milk are easier to digest.

You can leave notes for your Instacart shopper to specify the exact Beyaz Peynir you're looking for in case they have to make a substitution for the brand you've chosen!

Beyaz Peynir is a traditional feature of Turkish breakfasts where it's served alongside olives, tomatoes, cucumbers, eggs, butter, jam, honey, pastries, and a spicy Turkish sausage known as Sucuk. For lunch, you may find Beyaz Peynir in a sandwich or crumbled atop a salad. Beyaz Peynir is also used in traditional Turkish dishes like:

Buy your favorite beyaz peynir online with Instacart. Order beyaz peynir from local and national retailers near you and enjoy on-demand, contactless delivery or pickup within 2 hours.

No, Beyaz Peynir and paneer are not the same. Paneer is an Indian cheese that's similar to American cottage cheese. Paneer is made by curdling warm milk with an acid like lemon juice or vinegar. It is squeezed and pressed like Beyaz Peynir. Eastern Indian paneer is kneaded, making it crumble more easily, while other varieties of paneer are pressed and sliced.
Beyaz Peynir is very similar to feta, but the two are not the same cheese. The European Union has given feta a protected designation of origin. This specifies that feta cheese must be made either with sheep's milk or a combination of sheep's milk and no more than 30% goat's milk.
If you can't find the Beyaz Peynir you're looking for, you can often substitute other cheeses. You should carefully consider how you plan to use the cheese. If you're sprinkling it atop a salad or using it in a wrap or pita pocket, you might use feta cheese in place of Beyaz Peynir. For a pastry filling, ricotta is a similar substitute, though it has a sweeter flavor. Paneer slices well and has a similar taste to Beyaz Peynir.