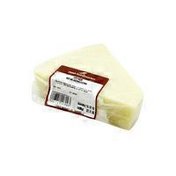 The Instacart guide to kefalotyri products

A traditional Greek cheese, kefalotyri (pronounced KEF-ah-loh-TEER-ri ), is usually made from raw goat's milk and/or sheep's milk. Depending on the mixture of milk used to make the cheese, it could have a color ranging between white and yellow.

This tough cheese has a sharp flavor and dry texture. It dates back to the Byzantine era, and it's believed that this cheese is related to most Greek hard cheeses. The cheese is made throughout Turkey, Greece, and Cyprus. It's also known historically to be the first cheese produced at the beginning of a new season, ensuring that the milk used was taken once the lambs were weaned.

Whereas young cheeses are aged between 2-3 months, kefalotyri is aged for up to a year. Because it's aged for a longer time, kefalotyri has a stronger flavor. Its taste is similar to Gruyere, but kefalotyri is saltier and harder. It also resembles another Greek cheese called kefalograviera, another type of sheep's and goat's milk but is slightly softer and not as salty.

If you're looking for ways to use kefalotyri, these are some of its most common uses:

Buy your favorite kefalotyri online with Instacart. Order kefalotyri from local and national retailers near you and enjoy on-demand, contactless delivery or pickup within 2 hours.

Kefalotyri is an extremely versatile cheese as you can use it instead of several types of cheeses. Some cheeses you can swap out include the following:
Yes, you can freeze this type of cheese because it's a hard cheese. You can either freeze the cheese in grated form or wrap it in aluminum foil and place it in a freezer-safe plastic bag or container. This prevents the cheese from developing freezer burn.

It's best to avoid freezing huge chunks of cheese as it will lose its moisture quicker and become crumbly once thawed. The texture of the cheese is the main component that changes when you freeze cheese, so if you plan to use the cheese in sauces or grated, it's less of an issue than if you plan to fry it. If you freeze kefalotyri, it should last for about 6 months in the freezer. Make sure to defrost the cheese in the refrigerator before you use it in a recipe.
Compared to Parmigiano-Reggiano, kefalotyri is the healthier option. One ounce of kefalotyri has 7.5 grams of total fat, 20 milligrams of cholesterol, and 248 milligrams of sodium. Its sodium is almost half of what you would find in Parmigiano-Reggiano. If you're on a low-sodium diet or want to avoid consuming a lot of salt, consider using kefalotyri cheese.