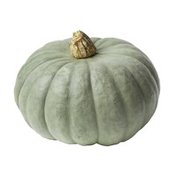 Crown prince squash, also known as Cucurbita Pepo, is a winter squash from the Cucurbitaceae family that bears fruit in autumn. The vegetable is native to New Zealand, but it spread quickly throughout Australia and is now grown in the United States and Europe, as well. It's thought to be a relative of the kabocha squash.

Winter squashes like this are easily stored for use in the cold winter months. Crown prince squash is easy to spot because of its distinctive color, which is a pale grayish-blue. Inside, the flesh is a brilliant orange. The crown prince squash is typically between 10 and 14 inches in diameter with a thin, smooth rind.

The flesh of the crown prince squash is dense and relatively dry with a somewhat waxy texture. The central cavity has a cluster of flat, moderately sized seeds similar to pumpkin seeds.

Although the crown prince squash is a lesser-known vegetable, it's not without its accolades. In 2011, this squash received the Royal Horticultural Society's Award of Garden Merit in the United Kingdom. This award is given to produce varieties that exhibit outstanding flavor and growth characteristics.

Crown Prince Squash Near Me

Crown prince squash is a good source of beta carotene, as you might suspect from the bright orange flesh. Beta carotene converts to vitamin A in the body. It provides powerful antioxidant properties and may help protect the body from certain cancers, heart disease, and even Alzheimer's disease. Consuming beta carotene regularly can improve your eye health, help your lungs work properly, increase your skin's defenses against UV radiation, and improve cognitive function.
Yes, you can eat the seeds from crown prince squash much the same way you would eat pumpkin seeds. They're best when cleaned and lightly roasted. Consider flavoring them with your favorite spices to make a simple, crunchy snack that you can enjoy on the go.
You can store a whole crown prince squash for three to six months if you keep it in a cool, dark place. Make sure there's good air circulation, or the squash may begin to rot. Once you've sliced the squash, you can keep unused wedges loosely wrapped in the refrigerator for about two days. Consider how you will use the squash before you open it so you can make the best use of this large vegetable.

You can order crown prince squash and other vegetables quickly and easily through Instacart. Visit the website or download the Instacart app to create your account and browse the stock at participating stores in your area. Once you've found the products that you're looking for, you can add them to your virtual cart in just a few taps. Your Instacart shopper will then fill your order for store pickup or home delivery. You can get your groceries the same day!