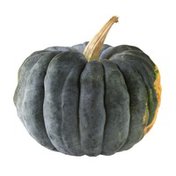 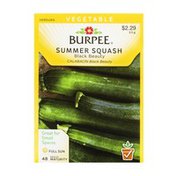 The Black Futsu is an uncommon Japanese winter squash. This variety is easy to pick out from a crowd because of its black rind covered in warts and bumps. However, as a Black Futsu matures, its rind yellows and then turns gray. A little while longer on the vine, the gray starts to offer orange and greenish hues.

When you cut the Black Futsu squash open, it should reveal flesh that's bright orange. The flesh of the Black Futsu is described as having a flavor between pumpkins and chestnuts. The flesh is buttery and sweet with slight hints of nuttiness. Once you open it up, you should see that the skin is very thin.

Black Futsu squash range from the size of a grapefruit to about three times as large. On average, they weigh anywhere from three to five pounds.

The Black Futsu squash has been cultivated in Japan for centuries. This squash is traditionally prepared during celebrations for the winter solstice in Japan. It's often mixed with red beans in sweet bean soups, which offer good luck as the days begin to grow longer. Since the Black Futsu has an impressive shelf life, many people save them to enjoy during the winter months.

Though the Black Futsu squash is a somewhat rare item, it is rising in popularity in the United States and Europe. You may be able to find the Black Futsu in grocery stores that specialize in produce or farmer's markets near you. Many independent growers choose to add the Black Futsu to their garden to enjoy their hardiness, staying power, and unique appearance.

Black Futsu Squash Near Me

You can certainly try, but you don't have to. The Black Futsu's thin skin is edible, so you can leave it on as you prepare the squash to give it a chewier texture. Just be sure to wash and scrub your squash before you eat the skin.
Black Futsu lasts an impressive amount of time. If you keep it in a cool, dark place, the Black Futsu can last up to six months. Try to leave at least 2 inches of stem on the squash if you're planning on holding onto it for a couple of months. Try to keep your squash whole until you're ready to use it. If you have leftovers, you can place your Black Futsu in a sealable plastic bag and keep it in the freezer for up to one year.

Download the Instacart app or visit our website to start shopping from the comfort of your home. Whether you're on the hunt for a Black Futsu squash or you simply need to bolster your home's inventory, Instacart has you covered. Choose your favorite store, fill your virtual shopping cart with the items you need and want, and let Instacart shoppers handle the rest. Depending on the store, you can order your items for pick-up or have them delivered straight to your door! When you're short on time, Instacart is here to help you get things done.