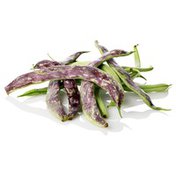 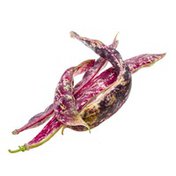 There are widespread beliefs that purple hulled peas originated from Africa, specifically Niger. Just as the name implies, it has a purple color that makes it easy for harvesters to spot during harvest. They are housed in long, thin pods that are 3 to 6 inches long. Each pod houses between six and 13 seeds, which can either be kidney or oblong-shaped.

Purple hulled beans have several varieties, such as the crowder pea, the cream or conch peas, and the Southern peas that can be seen in bushes or growing on vining plants. They are also known as “pink-eye purple hull peas,” “Pink-eyed peas,” and “Southern peas.” Although they are similar to the popular black-eyed pea, purple hulled beans differ in color, appearance, and taste. It became a popular delicacy among humans when they found out the plant helps in fixing soil nitrogen required for plant growth. Purple hulled beans are a good source of plant fiber that aids digestion in humans. They also contain iron, folate, and some amounts of calcium and potassium, which functions as electrolytes and helps in fluid retention in the body.

The purple hulled bean plants grow in a bushy pattern, and the plants produce soft textured beans that can be eaten with soups, stews, and can also be enjoyed plain when it is boiled. Purple hulled beans are consumed for their flavor, vitamins, and minerals.

Purple hulled beans are also popular in Asia, Africa, Australia, South America, and Europe. The beans are sold fresh in local markets. They can also be found dried or frozen in supermarkets and grocery stores. Apart from the fact that they are a perfect choice of crop to plant in late summer, purple hulled beans are harvested several times and in different stages during planting season.

Their characteristic purple color is obtained from the same pigment that gives the apples and pansies their distinct color.

Purple Hulled Beans Near Me

It is easy to detect bad purple hulled beans through their sour smell and the presence of a whitish liquid around the beans. For a frozen purple hulled bean that has gone bad, one can detect early signs of spoilage through its wrinkled texture and whitish skin, also known as freezer burn.