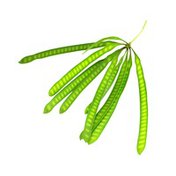 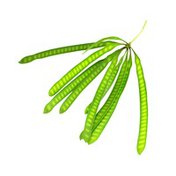 The Instacart guide to guajes

Guajes (pronounced "GWA-hez") are legumes that are popular in Mexican cuisine. You might also find them in the store under the names hauxya, haujes, or guaje beans. When the Spanish arrived in southern Mexico in the early 1500s, they came across the Leucaena Leucocephala tree, which is also known as leadtree in English. Native people in Mexico used the pods from this tree as food and for medicinal purposes.

Guaje is grown mainly in southern Mexico, where the climate is hot. The trees prosper in areas that don't experience frost or have dry seasons lasting longer than seven months. Those in the Philippines use the seeds instead of coffee beans, while residents of the Virgin Islands and Puerto Rico make jewelry out of the seeds.

The seed pods are thin and flat and are about a foot long. They look somewhat like incredibly long sugar snap peas. The seed pods are considered inedible, but their small green seeds are tender. The seeds are about the size of lima beans and take on a brown hue once they dry and age. The pod's color ranges from green to red and is slightly translucent, so you can see some of the seeds along the pod's length. The seed's taste is slightly bitter and has hints of avocado, okra, garlic, and pumpkin seed.

Buy your favorite guajes online with Instacart. Order guajes from local and national retailers near you and enjoy on-demand, contactless delivery or pickup within 2 hours.

As a low-calorie legume, guajes are full of many health benefits, no matter which way you eat them. Some of these benefits include the following:
If you're not quite ready to use the guaje pods, you can keep the legumes in the refrigerator for up to one week. Lightly wrap the whole guaje pods in plastic, and place them in the refrigerator. You don't need to separate them from the stem until you're ready to use them. Shelled seeds won't last nearly as long, though. Once you remove the seeds from the pods, place them in an airtight container and put them in the refrigerator. They should last for a few days this way.