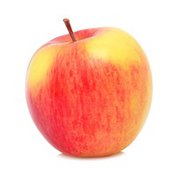 The Instacart guide to Holstein apples

Experts believe the Holstein apple descended from Cox's Orange Pippin. This yellow-skinned apple presents a pretty, reddish-orange blush. In the world of apples, Holstein's taste and texture give it a lot of versatility. The Holstein has delicious flavor and aroma in its cream-colored, firm flesh, plus plenty of juiciness. It tastes sweet and slightly tart with hints of pineapple.

The Holstein apple was first discovered in Germany in 1918. In all likelihood, the Orange Pippin landed on the ground somewhere during World War I and sprouted, eventually becoming the Holstein tree we know today. Holstein apples grow larger than the Orange Pippin, probably due to the tree's vigorous nature. The tree works well in personal gardens, as it doesn't pollinate other trees and has a disease resistance that helps it thrive without a lot of attention. Its flowers are susceptible to frost damage. Ripening occurs in September.

Holstein's crisp flesh makes it the perfect apple to snack on, either fresh and whole or sliced. The Holstein's sweetness lends itself to desserts. You'll find them delicious when baked in pies or as a savory-sweet addition to your apple-bourbon glazed pork chop. Holstein apples have greater longevity for storage, lasting up to five months when kept appropriately.

Holstein Apples Near Me

Buy your favorite holstein apples online with Instacart. Order holstein apples from local and national retailers near you and enjoy on-demand, contactless delivery or pickup within 2 hours.

Yes, Holstein apples have a naturally sweet, tangy flavor that remains with the juice when pressed. The Holstein's juice lends itself more to making apple juice than apple cider, but both are often enjoyed with the Holstein apple.
Absolutely. Studies show that the apple's skin contains 50% more vitamins and antioxidants than the flesh alone. These nutrients have been linked to cancer prevention, improved cardiac health, and other diseases. Holstein apples are rich in Vitamin C and dietary fiber and low in saturated fat, sodium, and cholesterol, making them a welcome addition to any healthy diet.
You should always wash your apples first. Some farmers may use chemicals like insecticides or fertilizers during cultivation that remain on the skin. The Holstein's vigorous capacity for growth, combined with its disease resistance, limits the need for intervention. Apples naturally produce a wax-like coating that results in a thin, milky-white film. While healthy to ingest, the coating does nothing for the flavor. A quick polish with a clean, dry cloth will restore the Holstein apple's color and shine. Some farmers add a synthetic wax coating after harvest to protect against moisture loss and damage during storage and shipping. Most waxes are made from natural, plant-based compounds, but some are laboratory synthetics containing petroleum or polymers.