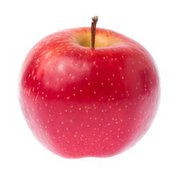 The Instacart guide to the Southern Rose apple

Like so many other florae, the Southern Rose apple began its existence through a random act of nature. A chance seedling sprouted, either by accident or some genetic mutation. Farmers discovered the Southern Rose apple in the 1980s in the Hawke's Bay region of New Zealand. Since then, propagation has been achieved through grafting and controlled and marketed by New Zealand's ENZA group. ENZA specializes in exporting pip fruit all over the world.

The Southern Rose apple has a completely dark red skin. Inside, the juicy, cream-colored flesh has a firm, crisp texture and a tangy sweetness. Southern Rose apples share many of the same characteristics as their neighboring cousin, the Braeburn, and often get referred to as the Red Braeburn. Its ability to resist browning after cutting puts the Southern Rose apple in a unique sub-category of apples that includes the Opal and Arctic apples. The Southern Rose and Opal apples are not genetically modified for those with GMO concerns, but the Arctic apple was created through genetic modification.

Southern Rose Apple Near Me

Yes, but the primary wax coat actually gets produced by the apple itself. This natural wax coating prevents the apple from losing moisture while protecting it from insects and other bio-invasive forces. The natural wax coating of an apple has a milky-white appearance that dulls the color of the apple. Rubbing an apple on your shirt will remove the wax and return an appealing shine. Some apple farmers add a synthetic wax coating to help preserve and protect the apple during storage and shipping. Most of these synthetic waxes are organic, made from trees and leaves, yet some get produced in laboratories from polymers and petroleum products. Washing your apple before eating will remove any natural or synthetic wax coating.
Yes, but beware of wax coatings and any chemicals that farmers may apply during cultivation, post-harvest, and delivery, and wash your Southern Apple before eating. Studies show that apples eaten with the skin on contain up to 50% more antioxidants and nutrients those without the skin. Many of the nutrients in an apple's skin are beneficial to the human body. Apples are high in dietary fiber and Vitamin C and low in cholesterol, sodium, and saturated fat.