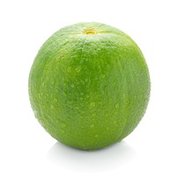 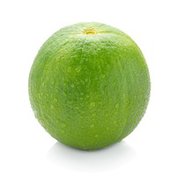 The Instacart guide to calamansi

Calamansi is a citrus fruit found in the Philippines and throughout Southeast Asia. The small fruit has a taste similar to lemon, lime, or oranges but unique to the Calamansi fruit. Calamansi is one of the four great agricultural foods grown in the Philippines, along with bananas, mangoes, and pineapple. This tropical citrus fruit is used extensively in Filipino and Southeastern Asian cooking. The fruit of calamansi, also known as calamondin, is much smaller than a lemon and even smaller than common limes that you find in the grocery store.

Calamansi trees grow to about 25 feet and are a hybrid of loose-skinned mandarin and a kumquat. Calamansi belongs to the Rutaceae family, and the genus is Citrofortunella Microcarpa. The oblong-shaped fruit is less than an inch in diameter and has a thin glossy skin that starts out green and, when fully ripe, turns a bright orange. However, calamansi fruit doesn't need to ripen to harvest them fully. Generally, calamansi fruit is picked when they're still green. Inside of the fruit, the flesh is a beautiful orange color with several ivory-colored large seeds scattered throughout the flesh.

Calamansi juice is generally used to help bring an acid balance to foods similar to how lemons and limes are used. Calamansi juice is often added to cocktails or to make a refreshing beverage when sweetened with sugar or simple syrup and added to sparkling water. Because the rinds of the calamansi are thin and sweet, they preserve well in marmalades.

Calamansi trees are native to China, and as explorers discovered the wonderful taste and tartness of this sub-tropical fruit, they brought the fruit back with them. Today, calamansi is grown throughout Southeastern Asia, including Malaysia, Indonesia, India, and the Philippines, where most calamansi fruit is grown.

Buy your favorite calamansi online with Instacart. Order calamansi from local and national retailers near you and enjoy on-demand, contactless delivery or pickup within 2 hours.

Calmansi is quite high in vitamin C, which helps with collagen development, boosts your immune system, and has anti-inflammatory properties. The nutritional value found in 100 grams of calamansi juice includes:
These nutritional values will change when you add sweeteners or other food products.
Calamansi marmalade is beautiful in color because of the bright orange juice you get from squeezing the fruit. Spread this on toast, spoon it over ice cream or yogurt, or top a cheesecake with this tasty calamansi marmalade. This recipe will fill a four-ounce jar.

Wash and de-seed the calamansi fruit. Slice the fruit, including the skin. Put the fruit and the water into a small pot, bring to a boil, reduce heat to a simmer, and cook for about 20 minutes. Add the sugar and cook for another 15 minutes. Remove the stove, allow the calamansi marmalade to cool, then place in a sterilized jar. Keep in the refrigerator for up to three months.