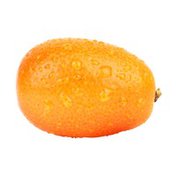 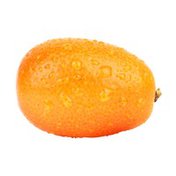 The Instacart guide to mandarinquats

A botanical hybrid of the mandarin orange and kumquat, the mandarinquat belongs to the citrus family. It's often thought that mandarinquats are related to oranges because of their coloring, but they have no orange parentage. The fruit is also known as the Indio mandarinquat, a reference to Indio, California, where the first trees were grown.

Dr. John Carpenter, who worked at the U.S. Date and Citrus Station, created the first mandarinquat around 1972 when he crossed an Heirloom Nagami kumquat from Florida with a Fancy mandarin. It took until 1989 for commercial growers to become introduced to the mandarinquat, which were originally grown for ornamental use and later sold for eating.

The mandarinquat's elongated and round tear-drop shape narrows near the neck, almost resembling a nose at the end. Its bright orange flesh is tender and juicy, and you'll probably find three to nine small seeds inside. Thin membranes divide the fruit into six to seven segments. Its citrus taste is mostly sweet and a little sour, almost like a sour tangerine.

Buy your favorite mandarinquat online with Instacart. Order mandarinquat from local and national retailers near you and enjoy on-demand, contactless delivery or pickup within 2 hours.

You can keep mandarinquats on the counter for up to two days. If you want them to last longer, place them in the refrigerator, where they will keep for up to two weeks.

Another option is to freeze mandarinquats, although you cannot freeze whole pieces of this fruit. Peel the mandarinquats, and remove as much of the excess pith as possible. Section each piece of fruit and place the fruit into freezer-safe plastic bags or containers. Once thawed, you can still enjoy them raw, although the texture and flavor might change slightly. Consider using these thawed pieces in smoothies or in juice form. Frozen mandarinquats should last for a few months.
As low-calorie fruit, mandarinquats have many similar nutrients found in mandarins, some of which include the following: