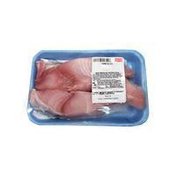 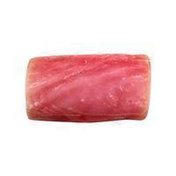 The Instacart guide to shark

Shark is a firm, white meat type of seafood. It is a good source of protein and is rich in nutrients, such as vitamins A, D, and E. Many shark species are fished for their meat, but not all sharks are edible. Some of the most common species hunted for their meat include blacktip, mako, shovelnose, sevengill, soupfin, smoothhounds, leopard, and thresher. Other names for shark meat include grayfish, sea ham, whitefish, flake, gummy, huss, cape steak, rigg, rock salmon, sokomoro, steakfish, and dogfish.

Shark meat is a staple food in many countries. You can find shark on menus worldwide, including Japan, Mexico, Australia, and Iceland. Many people think consuming shark is a new trend. However, evidence of people eating shark meat dates back to about the fourth century CE. Though shark is not as common in the United States as other parts of the world, there is a growing market. It's becoming more popular every day. Shark meat is used to make tacos, soups, jerky, kabobs, and more.

Save time and money when you buy your favorite shark online via Instacart. Enjoy on-demand, contactless delivery or pickup from local and national retailers near you in as little as 2 hours!

Buy your favorite shark online with Instacart. Order shark from local and national retailers near you and enjoy on-demand, contactless delivery or pickup within 2 hours.

Shark meat has a mild, almost sweet flavor that people often say does not taste fishy. It tastes similar to chicken or alligator meat. Some people even say it tastes like pork.
Many people think it's not legal to eat shark meat in the United States. However, shark is perfectly legal to consume. In fact, U.S. shark fisheries provide grocers with a sustainable source of meat, and it's served in many restaurants across the country. It's only the practice of finning that's illegal. Finning is when a fisher cuts the fin off a shark and throws the finless fish back into the water to die.
Sharks produce large amounts of urea. As soon as a shark is reeled in, the urea in its system starts to break down into ammonia. It then gets absorbed into the shark's flesh and comes out through the skin. If you leave the meat unprepared for too long, it can start to smell like ammonia. Marinating shark meat in lemon juice, buttermilk, vinegar, or saltwater helps reduce the amount of urea and minimize the smell of ammonia.