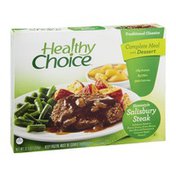 The Instacart guide to rump steak

Rump steak, also called round steak or butt steak, comes from the round, the area at the back of the animal near the tail and back legs. It's not as tender as some of the other cuts of meat available, but it's very flavorful and affordable. Most rump steak is beef, but lamb rump steak is also available. Rump steak is usually divided into eye of round, bottom round, top round, and round tip.

Eye of round is long and thin, and it comes from the thigh and hip muscles. It's also called breakfast steak, sandwich steak, wafer steak, minute steak, and eye of the round. It looks a lot like a tenderloin. A whole eye of round weighs about 8 pounds. Eye of round is a lean, flavorful cut that's usually roasted or slow-cooked to increase tenderness. You can also marinate it and then grill or pan-fry it. Many delis use roasted, sliced eye of round in roast beef sandwiches.

The bottom round, also called the gooseneck or beef silverside, comes from the outer part of the animal's leg. When the bone is left in, it's called a standing rump roast. The heel is the lowest part of the bottom round, and people often use it to make chip steak, a traditional ingredient in Philadelphia cheesesteak sandwiches. Top round, also called London broil or butterball steak, is more tender than other rump steaks, and it tastes good on the grill or pan-fried.

You can choose round tip, also called sirloin tip or sirloin knuckle, as well. It's near the front sides of the rear legs, where the round meets the sirloin, and people often use it in kebabs.

Rump Steak Near Me

Buy your favorite rump steak online with Instacart. Order rump steak from local and national retailers near you and enjoy on-demand, contactless delivery or pickup within 2 hours.

Some rump steak is aged for a few weeks before sale. This lets connective tissue break down over time and tenderizes the meat. The moisture that evaporates from the muscle also makes the flavor stronger. During aging, also called dry-aging, meat hangs on special racks at temperatures close to freezing.

Dry-aged beef is more costly, but you can save money by approximating the aging process in your refrigerator. Remove your rump steak from the package, rinse it, and dry it with paper towels. Then, cover it in cheesecloth and put it back in your refrigerator. Replace the cheesecloth daily for three or four days, and then cook your rump steak.
Picanha is a cut of rump steak that's popular in Brazil and Portugal. It's the meat around the base of the spine, and it's sometimes called top sirloin cap, rump cap, rump cover, or coulotte. The word "picanha" comes from a term for the pole used by ranchers in Portugal and Spain for herding cattle. This cut has a thick layer of fat that adds plenty of flavor.
Rump steaks are much leaner than most other cuts of beef, so they're a great choice for people who want to eat healthily. They contain protein, vitamin B12, vitamin B3, vitamin B6, iron, phosphorus, selenium, and zinc.

Look for rump steaks that have a bright red color, even edges, and some marbling. They should feel firm and cold. Avoid rump steaks with liquid at the bottom of the package. USDA Prime rump steak is the best quality, and it comes from cows whose age is younger than 3. Only around 3% of beef gets this designation. USDA Choice is medium-quality, and Select is leanest.