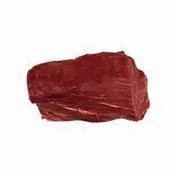 The Instacart guide to ChÃ¢teaubriand steak

The châteaubriand legend starts with a French aristocrat named François-René de Châteaubriand, who lived in the 19th century. This aristocrat's chef was said to invent the dish by preparing a large, boneless beef cut layered in two or more steaks. The layers of meat were tied in a bundle, then grilled or roasted. Once the steaks that formed the outer layers were charred, the chef considered the roast done and discarded the burnt outer steaks. The extravagant technique was said to ensure the châteaubriand steak cooked throughout evenly.

Today, châteaubriand isn't prepared wrapped in other steaks, and interpretations of the word châteaubriand debate whether the term refers to a roast or steak.

The châteaubriand roast preparations take a section of approximately 4 inches of the beef tenderloin, so you're getting the most tender cut of beef available. The châteaubriand needs careful roasting to ensure it cooks properly since it's so thick. You'll often find butcher shops marketing center-cut beef tenderloin roasts in this way.

You can't go wrong with a quality châteaubriand steak if you're preparing a special meal. Instacart simplifies the shopping experience with delivery in as little as 2 hours!

While châteaubriand is technically a dish and not a cut of meat, you'll often find cuts from a beef tenderloin sold as châteaubriand steak. This steak cut and filet mignon are similar types of steak, originating from the same part of a cow. When cooked properly, both deliver very tender meat.

Both cuts of meat come from the tenderloin. However, châteaubriand comes from the center, and filet mignon refers to medallions cut from a tenderloin's narrow tip.