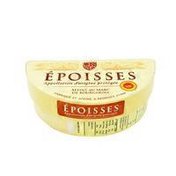 The Instacart guide to Epoisses

A French cattle's milk cheese, Epoisses is regarded as one of the world's great cheeses. Epoisses is a semi-soft textured cheese with a spicy aroma. It is soaked in brine, preserved for four weeks, and then repeatedly washed in Marc de Bourgogne, a cordial by-product of Burgundy's local vino industry. People love Epoisses for its potent aroma and robust taste. This ideal French cheese has a consumable reddish-brown rind that covers a rich, creamy interior. Epoisses are lapped and sold in a round wooden box which gives a rustic and elegant presentation.

The Cistercian brothers first made Epoisses in the Burgundy, France region in the 1600s. The monks handed down the recipes to ranchers in the area who continued to create this spicy cheese for hundreds of years. In 1991, France's government accorded Epoisses Appellation D'origine Controlee (AOC) controlled origin designation status, which preserves the customary cheese creating methods for Epoisses, protecting its identity and character forever.

To get the best Epoisses online, try out the Instacart app. After checkout, an Instacart shopper will shop your order. You can have your Epoisses delivered the same day when you order through Instacart!

Buy your favorite epoisses online with Instacart. Order epoisses from local and national retailers near you and enjoy on-demand, contactless delivery or pickup within 2 hours.

Epoisses cheese is better with a beer or spirit, particularly red wine, which is logical as the cheese's rind is usually washed with beer, Eau de Vie, or white wine.
You can eat Epoisses rinds that are peppered, coated with ash, or wine-infused.