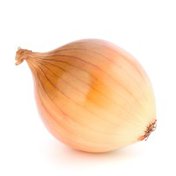 Walla Walla sweet onions are mild onions created to not be much like your typical onion. Harvested from the volcanic soils of the Walla Walla Valley in Oregon and Washington, these highly-sought spring onions are usually available in stores during the summer season. In Washington, only about twenty farmers cultivate the Walla Walla sweet onions across only five hundred acres in total. The harvest usually runs from mid-June to August, and the onions are then sent to stores in Canada, southern California, and the Pacific Northwest.

The history of the Walla Walla sweet onion dates back to Corsica, off the west coast of Italy, about a century ago. Peter Pieri brought a sweet onion seed from Corsica to the Walla Walla area in the 1800s, where Italian immigrants were harvesting the sweet onion since its early beginnings in the U.S. The onion was developed throughout the years to have a particular sweetness and for its round shape and large size. Walla Walla is Native American for "many waters", from the Walla Walla people of Northwest United States.

The sweet taste of the Walla Walla Sweet Onion comes from its unusually low sulfur content, which is about half what you would find in a regular onion. When you cut through a Walla Walla sweet onion, the expected stinging odor is far milder, to the point where most people cutting them will not tear up or face any discomfort. This along makes them a desirable onion to many a home chef. The onions can also weigh up to two pounds each, which adds to their novelty.

Even if it's the same seeds and species, in order to be called a Walla Walla sweet onion, it has to be grown in the very specific soil of Washington. If you are thinking of trying some sweet Walla Walla sweet onions or similar products, you can find some through the Instacart app. Just select the items you need for the day, fill your cart, and complete your purchase. An Instacart shopper will then head to the store to pick out the items you chose in your order. Place an order now to make your day a little easier, and we'll do our best to get your groceries delivered the same day!

Walla Walla Sweet Onions Near Me

Walla Walla sweet onions keep for about three to six weeks in a cool and ventilated place. They do not keep for very long if the air is not ventilated and cool. They can also be frozen in containers or plastic freezer bags to keep through the year. Freezing the onion is best to use for cooking later. Optimal long-term storage would be to keep the onions in near-freezing temperatures with good humidity and ventilation.
Walla Walla sweet onions need significant moisture in the first few weeks of growth. Keep the soil moist and mulch to maintain the moisture and for weed control. They can also be started indoors if the growing season is short. You can start indoors in late winter ten to twelve weeks before planting. These onions need full sun in northern areas and partial shade in hotter areas. In the northern states, the seed is sown in late August to be harvested in the summer. Colder winter areas are where seeds get sown in early spring. When the tops flop over, it means they are ready to be picked out from under the soil. They can also be picked fresh once they reach the desired size.
Walla Walla sweet onions are low in calories and have no fat, cholesterol, or sodium. They have a bit of fiber which is important for regular digestion. There's also calcium that is good for bone health, and iron, which helps carry oxygen throughout the body. It's also a good source of potassium, a nutrient that supports muscle function and recovery. Walla Walla sweet onions even provide plenty of vitamin C, a nutrient that helps the body fight off free radicals. It also helps repair bodily tissue, maintain a strong immune system, and with wound healing.