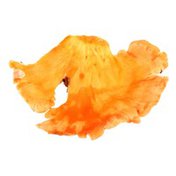 A lobster mushroom grows in forested areas in North America during the summer and fall. This food should not be eaten raw, but it tastes delicious when pan-fried or sauteed. Moist cooking methods are preferred for larger lobster mushrooms. Chopping lobster mushrooms into chunks and tempura frying them is a popular and delicious preparation method.

Lobster Mushroom Near Me

Buy your favorite lobster mushroom online with Instacart. Order lobster mushroom from local and national retailers near you and enjoy on-demand, contactless delivery or pickup within 2 hours.

Lobster mushrooms have cracks and crevices that can catch dirt, so it's important to clean them thoroughly before cooking them. When cleaning the mushroom, use a dry brush to wipe away any dirt. Don't rinse the mushroom with running water, as this can remove the vegetable's flavorful crust. For the most thorough clean, you may have to break the mushroom apart.
Lobster mushrooms have some health benefits, making them a guilt-free addition to your favorite recipes. Lobster mushrooms contain fiber, which can regulate your digestive system. There's also copper in lobster mushrooms, which helps with red blood cell production and iron absorption. Lobster mushroom additionally contains smaller amounts of vitamin B, vitamin D, and vitamin K, all of which contribute to overall health.
The best way to maintain the seafood-like flavor of lobster mushroom is by sauteing it. If you don't want to eat lobster mushroom by itself, you can sauté it and then add it to dishes like clam chowder or risotto. In a pan, add enough water to cover all your lobster mushrooms. Then, bring the water to a rolling boil and cook for about 15 to 20 minutes.

After draining the mushrooms, heat a skillet over medium-high heat and add butter or olive oil to the pan. Once your butter is melted, add your mushrooms and sauté until all the liquid is evaporated. You'll have to stir the mushrooms occasionally until they are browned.