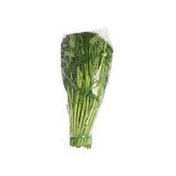 Water spinach, also called swamp spinach or river spinach, grows abundantly in Southeast Asia. It's used extensively in cuisines in tropical countries such as Indonesia, the Philippines, Malaysia, and Vietnam. This vegetable works great in soups, stir-fries, and other dishes where a green, mild flavor would benefit a recipe.

Water spinach is a semi-aquatic or herbaceous aquatic plant that grows with no or little supervision. In fact, it grows so fast that it's considered invasive in some states in the U.S. where it's been introduced. However, in many countries in Southeast Asia where it's used in a variety of dishes, the vegetable is never invasive. Conversely, it's perceived as a culinary blessing, as it grows so quickly and is therefore sold cheaply.

Water Spinach Near Me

Buy your favorite water spinach online with Instacart. Order water spinach from local and national retailers near you and enjoy on-demand, contactless delivery or pickup within 2 hours.

Because it's difficult to find out the sanitary conditions of the water where the water spinach grew, it's not usually recommended to eat the vegetable without cooking it first. To prepare the vegetable for cooking, rinse it very well to remove any grit or sand trapped in the leaves and stalks. Cut off and discard the first few inches of the stalks, as this portion is too fibrous and tough.

After removing the unwanted parts, cut the vegetable in half. The lower half, which consists mainly of the stalk, requires a longer cooking time, so you should separate this part from the leafy and more tender upper half. It might take a little practice to figure out the right interval of cooking time. However, once you get the hang of it, you'll surely be able to enjoy water spinach cooked just right in curries, stir-fries, or soups.
Before you store your water spinach, make sure it's clean. Remove and discard any leaves that are wilted, slimy, yellow/brown, and don't look fresh. Then, wash your water spinach well. It's best to do this using a salad spinner. After washing the vegetable, lay it out flat and let it dry on a paper towel. Once it's dry, wrap it in paper towels to absorb excess moisture, place it in a bag, and then remove the air. You can then store the vegetable in the crisper drawer of your fridge.

You can also place the water spinach in a plastic produce bag, but make sure to blow in some air to provide the vegetable with carbon dioxide. Then, store it properly in your fridge.

Keep the vegetable away from ethylene-producing fruits, such as tomatoes and bananas, as these fruits can cause the water spinach to wilt and decay too quickly.
Despite its name, water spinach isn't related to spinach (Spinacia Oleracea), nor part of the Brassica family. Instead, this vegetable is part of the morning glory (Convolvulaceae) family and has bell-shaped flowers and long vine-like stems. While it's not related to spinach, water spinach does taste a bit like a cross between watercress/yellowcress and spinach, but it doesn't have the bitter bite and slightly earthy taste that spinach can have.

Visit Instacart now and order fresh water spinach. Get water spinach delivered to you in as little as 2 hours!