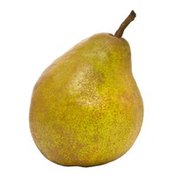 Are you searching for a delicious pear to add to your routine? You can't go wrong with Winter Nelis pears. These pears are small- to medium-sized fruits, with each Winter Nelis pear an average of 6 to 7 centimeters in diameter. A Winter Nelis pear will have a round to slightly conical shape, boasting a larger bottom portion that tapers up into the smaller, rounded neck.

A Winter Nelis pear will have green-yellow skin that becomes more yellow and spotted as the pear ripens. The flesh of this pear is cream-colored to ivory. The flesh can be described as moist, smooth, fine-grained, and dense, and it holds a central core with a few black-brown seeds in it. Ripe Winter Nelis pears have a melting quality and deliver a juicy, rich, and sweet taste.

Because Winter Nelis pears have an unusual russeted appearance, they are not commercially produced on a large scale. However, those that know Winter Nelis pears love them, thanks to their sweet flavor and buttery flesh. These pears also offer a good source of various nutrients, including fiber, iron, and vitamin C.

Even though those two names for Winter Nelis pears are French, the winter pairs actually were not grown until the late 1820s in France. The pears were introduced to both the United States and England before that. Winter Nelis pears come from Belgium — they originated in an area a bit to the north of Brussels in the town Mechelen, called Malines in French. Today, the late-season pears grow in the United States, United Kingdom, Europe, and Australia.

Winter Nelis Pear Near Me

If you want to speed up the ripening process for any pears you have, you can store them in a bowl with other ripening fruits or a paper bag. Doing so allows ethylene, a gas naturally released when fruits are ripening, to make the process faster.
You can eat Winter Nelis pears either raw as a delicious snack or dessert or cook them with methods such as poaching or baking. You'll want to peel and remove the russet skin before eating these pears. Then, enjoy these pears fresh on their own or sliced into fruit platters, salads, sandwiches, cheese boards, grain bowls, or pasta dishes. Winter Nelis pears are perfect for desserts as well, so use them in your recipes for muffins, scones, tarts, and bread.