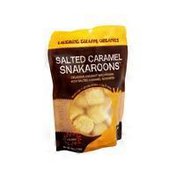 The Instacart guide to saskatoons

Saskatoons are very similar to blueberries in many ways. In all likelihood, if you didn't read the label, you might pick up a pint thinking they were blueberries. You probably would be pleased with the mistake, too. Saskatoon berries are blue pomes with the same shape and size as blueberries. They are sweet and nutty and, like blueberries, contain copious amounts of dietary fiber, biotin, riboflavin, iron, and manganese.

In the wild, saskatoons grow like blueberries, in shrub-like bushes that clump and spread. In rare cases, they grow as high as 16 feet, but they run between 1-8 feet tall on average. They grow everywhere in North America, from the central United States up to Alaska and across Canada. In Michigan alone, there are over 20 commercial growers. They go by different names depending on the region, sometimes called the juneberry, prickly pear, serviceberry, shadbush, and pigeonberry.

The saskatoon berry has historically been enjoyed by indigenous people wherever it grows. You can eat saskatoons picked fresh, or you can bake them into pies. Over the years, saskatoons have been made into jams and jellies or dried like cranberries and raisins. You can make wine, beer, and cider from saskatoon berries. Many indigenous people in Canada used them for making pemmican, which is dried meat that saskatoons get added to as a preservative and flavoring.

Buy your favorite saskatoons online with Instacart. Order saskatoons from local and national retailers near you and enjoy on-demand, contactless delivery or pickup within 2 hours.

Yes, saskatoons protect our immune systems. They are rich in magnesium, manganese, iron, potassium, copper, and carotene. Many experts consider saskatoons a better source of calcium than red meats, vegetables, and grains. Research shows saskatoons have very high phenolic, flavonol, and anthocyanin content. Studies prove these antioxidant berries have anti-aging, anti-heart disease, and anti-cancer effects on the body and reduce cardiovascular and inflammatory diseases. Saskatoons provide an excellent source of Vitamin C as well.
No research exists to support saskatoon berries are unsafe for dogs. In fact, many dog foods list the saskatoon berry as a component. As the saskatoon grows in the wild, many animals graze on them, from deer to elk and bears to rabbits. Birds also enjoy them. The only concern would be if your dog eats too many saskatoons and gets an upset stomach.
The saskatoon berry goes by many different names in North America. Etymologists trace the name "saskatoon" back to the Cree language word "misaskwatomina," which translates to "the fruit of many branches." A city by the same name exists along the Saskatchewan River banks, also derived from the Cree.