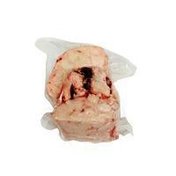 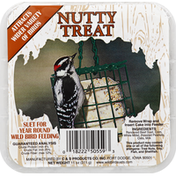 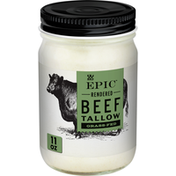 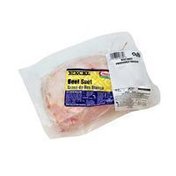 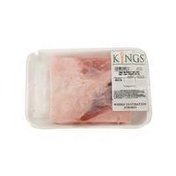 The Instacart guide to suet products

Suet is a raw hard fat that comes from either beef or mutton. The fat is found in the kidney and the loins of the animal it is removed from. Suet has a higher melting point, making it a popular fat option for pastries or deep frying.

While suet can be used to make tallow, which is used to feed birds through a rendering process, it is also a popular ingredient in many traditional recipes, such as British Christmas pudding.

To create suet, a butcher will remove the fat from the animal meat. It will then be clarified, chopped, and then boiled in water. The boiling process is important as it helps to remove all of the impurities. Once the mixture cools, the water and fat will separate, and the fat that remains is the suet.

When used in recipes, it will help the texture of the food to become light and fluffy because it has a higher melting temperature. This higher temperature allows a structure to be built in the food by creating tiny air pockets. Because of this unique effect, it is recommended that suet not be substituted with another fat when called for in a recipe.

The flavor of suet is bland and mild, but it has a meaty smell. It is dry and will crumble easily. When used in traditional puddings, the flavor is vibrant, and there is no taste of beef even though it is the source of the fat.

Suet is also used to make pie crusts and produces a very flaky and crispy texture, making it ideal for pies with wet filling. When used on meat pies, suet is often used alone in the crust but can be combined with butter on sweet pies to enhance the flavor.

Buy your favorite suet online with Instacart. Order suet from local and national retailers near you and enjoy on-demand, contactless delivery or pickup within 2 hours.

When you order suet via Instacart, it should be immediately put into the refrigerator. It can remain stored here for a few days, but it is best stored in the freezer if you have it any longer. You can increase its longevity and maintain its freshness for longer by wrapping it in freezer paper and sealing it in a freezer bag. Make sure to get out as much air as possible. Suet can be stored in the freezer for several months.

If you have a suet that has been rendered, you will be able to keep it at room temperatures for several months.
While suet has been used in cooking for centuries, it also has had many other uses throughout the years. It once was a prominent ingredient in candle making and is still used today by those looking to make traditional, natural candles. Other uses include shoe polish, leather cleaner, soaps, and bird feed. The latter is still a popular use today.

When used in bird feed, the suet has been turned into a type of tallow and is a hardened brick that can be placed outside for birds to feed on. You can make your own bird feed from suet or use ready-made blocks in the pet aisle.
It is possible to replace suet with other lard options, such as Crisco, but in doing so, it will likely alter the flavor of the recipe. Additionally, the lower melting point of other fat sources may require that you make adjustments to your baking and cooking times.

Many people may try to substitute suet for more healthy options, but the lower fat or lower calorie options may alter the consistency of your dish, especially if being used in pastries. While suet is high in fat and cholesterol, a little can go a long way, so using it in moderation is fine.

If you want to enjoy the rich flavor of suet in your recipes, you can find it at your local grocery store. Looking to use it today? Instacart shoppers are ready to take your order and can have your suet delivered to your door in as little as 2 hours!