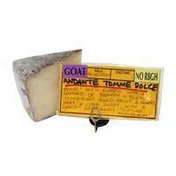 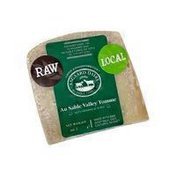 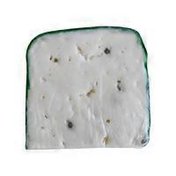 Tomme de Savoie is a subgroup of Tomme cheeses that are small, round, and have a thick rind, but inside is a buttery, semi-hard cheese with many holes. Tomme de “the region that they originate from” represents the town or village where the cheese is made. For example, Tomme de Savoie is produced in Savoie, a village in the French Alps.

After local farmers made butter and higher-fat cheeses for hundreds of years, they would use the leftover skimmed milk and turn it into this simple cheese. Since cheese keeps longer than milk, there was no waste. By using the skimmed milk, the fat content is lower, ranging from 20-40%.

Tomme de Savoie cheese is aged in cellars for several months. This is how the thick rind forms and how the flavors come about. Tomme de Savoie has tiny holes in it. Holes in cheese were once thought to be a problem. But the holes are important to the flavor—bigger holes in the cheese yield a stronger flavor, like Swiss cheese. Smaller holes yield a simpler flavor, like Tomme cheeses. The holes are created by bacteria that are released during later stages of the aging process. The bacteria release carbon dioxide gas that creates the holes. The longer the cheese is aged, the bigger the holes. Since most Tommes are aged for only a few months, the holes are smaller.

Tomme de Savoie Near Me

Buy your favorite tomme de savoie online with Instacart. Order tomme de savoie from local and national retailers near you and enjoy on-demand, contactless delivery or pickup within 2 hours.

Other Tomme cheeses like Tomme de Crayeuse, Tomme de Montagne, muenster cheese and gruyère are great substitutes. These cheeses have a similar texture and overall simple flavoring. They would also be perfect for serving with Tomme de Savoie on a cheeseboard.
No, it is not suggested that the rind be eaten. It tends to be very thick and has a bitter taste. The rind is cut off right before consuming the cheese.
Yes, it is available. Also, some American companies have started producing it and with much success.